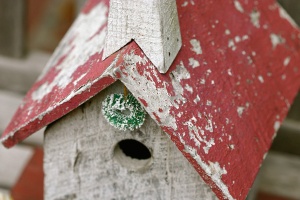 I wish I could say my recent trip to Wal-Mart was without incident but, as most trips to Wal-Mart go, it wasn’t. I hit a bird.

Let me qualify that statement by saying I didn’t hit the bird as much as the bird hit me. I must say that I fared much better in this little incident than the bird did. He flew into the path of my minivan which was traveling at an unfortunately high rate of speed. We mourned as a family for a few moments and then we continued on to the great American pastime of Wal-Mart night.

In our brief and artificial moment of silence I wondered to myself what God thought. I wondered if God took a moment to recognize the little bird that had the unfortunate collision with a Chevy minivan. I was reminded of Jesus’ words that Gods attention is on every sparrow that falls to the ground (Matthew 10:29-31). I believe He was aware and did, in fact, acknowledge from His place in eternity the passing of a humble sparrow.

I do not believe the passage champions animal rights. While I believe God is aware of all that occurs in His creation I do not believe He enjoins a moral obligation for man to subordinate himself to the animal kingdom. In fact the scripture goes on to say, “ye are of more value than many sparrows.” (Matt. 10:31). The truth is clear, God considers mankind the greatest of His creations.

If God saw that little bird fall to the ground, is there anything He cannot see? David was convinced there was nowhere he could go that God would not see him. He was so full of this truth he declared, “If I say, Surely the darkness shall cover me; even the night shall be light about me” (Psalm 139:11).

My mind raced as I began to consider that while God saw the bird fall He saw me keep driving. He saw me sleep and wake up in the morning. He watches me every hour of every day. He has numbered, according to scripture, the hairs on my head. More amazing than that, He values me more than those sparrows. He sees them, but He loves me!

If all this be true we have no reason to fear anything in this life. Luke recorded the words of Jesus, “Are not five sparrows sold for two pennies? And not one of them is forgotten before God. Why, even the hairs of your head are all numbered. Fear not; you are of more value than many sparrows.“ (Luke 12:6-7 ESV). A simple truth we often forget. He values His people more than anything else in His creation. More than the sparrows whose activities He monitors, He’s watching His children. He saw that bird die, but He died for me.